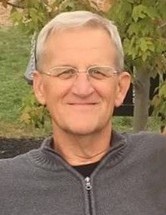 Warren “Twig” Smith , 71, of Carmel, passed away very peacefully in the presence of his wife and children on Sunday, January 30, 2022 at St. Vincent Hospital in Indianapolis.  He was born on September 22, 1950 to the late Roy and Myrta (Warren) Smith in Bloomington, Illinois.

Twig graduated from Illinois Wesleyan University where he was a member of the Alpha Iota chapter of Sigma Chi.   He began his financial career at GTE where he later retired and began a second career as a loan officer, most recently at First Financial Bank.  He was a member of Cornerstone Lutheran Church and also served on many committees and boards in the Noblesville area.  Twig’s love and passions included golf, reading and playing cards, but most of all he loved spending time with his wife, children and beloved grandsons.  Twig attended any and all activities his children or grandsons were involved in.   He also treasured his dear friends and Sigma Chi brothers.

Twig is survived by his wife of 50 years, Vicki; his son, Todd (Halle); his daughter, Amy (Gregory) Nowling; and his three treasured grandsons, Jacob and Reese Smith, and Jackson Nowling.  He is also survived by his sister, Vicki Lynn Smith; mother-in-law, Constance Kolb; and sister-in-law, Patti (David) Stoens.

If you would like to commemorate a life well lived, a donation to the Megan S. Ott Foundation, PO Box 1372, Noblesville, IN 46061, or the charity of your choice would honor him.  Also, in Twig’s memory please give your loved ones a hug.

To order memorial trees or send flowers to the family in memory of Warren "Twig" Smith, please visit our flower store.
Send a Sympathy Card