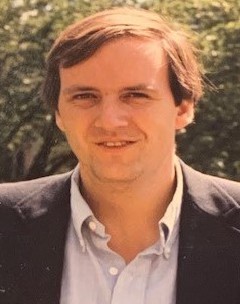 Victor “Vic” Caleca, our beloved, brilliant and talented husband, father and brand new grandfather, has died at an Indianapolis hospital following a medical emergency. His death was not Covid-related. Vic was only 64, and leaves his family and friends heartbroken.

Vic was a respected and gifted newspaper journalist and editor, but most of all, he was our family’s rock star: smart, funny, loving, wise, kind, generous, steadfast and always protective. He was a truly good guy who lived by the highest standards and made our lives golden with his love, intellect, advice and pitch-perfect humor.

Vic met and married his wife, Linda, when they were both students at Northwestern University’s Medill School of Journalism near Chicago. From the start, they were inseparable. Theirs was a nearly 45-year perfect partnership, both in and out of newsrooms. Vic was a bright, gifted and personable reporter, writer and editor. His 27 years at The Indianapolis Star included stints as state desk editor, suburban bureau chief, city editor and assistant managing editor. He then joined Ball State University’s media relations team as a writer and editor. Though he reported and managed dozens of breaking news stories over his career, he most loved taking complicated medical or science issues and simplifying them for readers. A series of stories on cancer, its causes, and its terrible toll on patients was one example; he wrote that award-winning series in 1985 with his close friend, the late, great journalist Richard D. Walton.

Vic was a natural-born writer and editor: he did both with incredible speed, clarity, humor and grace. He was known for his integrity, fairness and devotion to journalism that brings real results, and was so approachable that colleagues routinely sought him out for help. He had an ever-curious mind and a thirst to learn new things. Recently, he was writing short stories and baseball league blogs while also working on a science fiction novel.

Above all, Vic was a devoted and proud husband, father, son, brother-in-law, uncle and grandpa who nurtured his family. He loved family travels, books, music, movies, museums, sports and hiking with our dog, Marlo. His love of J.R.R. Tolkien’s books was so great that he could almost recite them, and he showed his children The Lord of the Rings movies early on and often. As a Northwestern University alum (BSJ, 1978), he was a loyal Wildcats fan through good years and bad, and he surely was the Chicago Cubs’ most dedicated fan ever.

Vic is survived by his wife, Linda Graham Caleca; their son, James Anthony Caleca; their daughter, Anne Elizabeth “Annie” Caleca; Annie’s fiancé, Nicolas Gates, and their beautiful baby daughter, Millie Anne Nicole Gates. He is also survived by his much-loved brothers-in-law and their families: James and Nancy Graham, Tim and Suzanne Graham, and their children Zachary, Claire, Paul, Christian and Nicole Graham, and Nicole’s fiancé, Ross Ragsdale. We thank them all for helping us during this devastating time.

He was preceded in death by his parents and in-laws, whom he loved and deeply admired: Vito and Virginia Caleca, and U.S. Army Colonel Henry and Anne Graham.

In lieu of flowers, please give to your favorite charity or choose one that Vic liked best: Donors Choose (www.donorschoose.org), the National Parks (www.nps.gov), or Feeding America (www.feedingamerica.org). Or subscribe to your local newspaper to help keep journalism alive.

Services were private, but a memorial will be planned later when it’s safe for family and friends to gather.

To order memorial trees or send flowers to the family in memory of Victor "Vic" Caleca, please visit our flower store.
Send a Sympathy Card