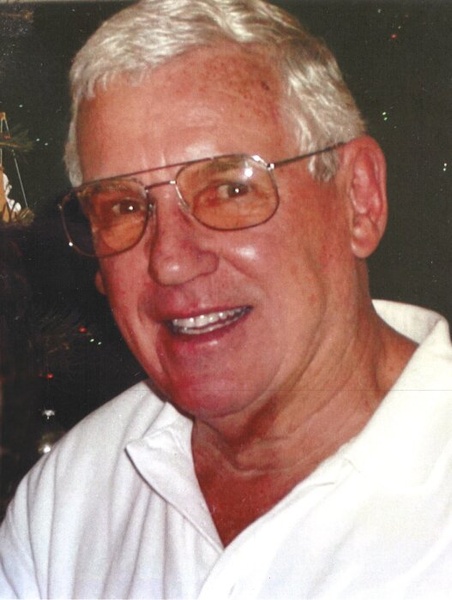 Even Mick Melvin knew that all good parties must eventually come to an end. Mick said goodbye peacefully at home on June 13, 2021, with his bride of sixty-six years by his side.

Michael (“Mick”) Melvin was born to Francis and Mildred Melvin on December 21, 1932 in Elwood, Indiana. His mother called him “Mickey,” and to the day of his death, his Mickey Mouse watch was his signature accessory. As a teenager, Mick spent long summer hours at his parents’ cottage on Lake Shafer, fishing and waterskiing with his brothers from a wood Chris-Craft boat. In the summer of 1950, he met a striking, vibrant beauty named Betsy Silvage from Chicago, whose family rented the neighboring lake cottage. The rest, as they say, is history.

Mick was an active member of St. Joseph’s Catholic Church, a former member of the Knights of Columbus, and grew up in Catholic schools, including St. Joseph’s Grade School and Marmion Military Academy in Aurora, Illinois. Mick excelled academically and athletically and went on to the University of Dayton and Notre Dame University. He graduated from Notre Dame in 1955, immediately married Betsy, and started popping out the first of eight children. He proudly served in the United States  Army and ascended to the rank of Captain before being honorably discharged in 1964.

Mick was a gifted and fearless athlete, playing football, basketball, baseball, and track at Marmion. In 2001, he was inducted into the Marmion Athletic Hall of Fame. He enjoyed tennis, fishing, and golf and took immense pleasure in watching his children and grandchildren grow into decorated athletes. Mick rarely missed a televised Notre Dame football game.

Mick took the reins of Monticello Manufacturing Corporation from his father, and grew it into a thriving commercial enterprise in Elwood. Due to his acute business acumen and strong work ethic, General Cage Corporation grew out of Monticello and he later founded State Plating, Inc., which became the largest nickel chrome plating job shop in the United States. He was a man of integrity, true to his word and sealed business deals with a gentleman’s handshake.

On a whim in 1982, Mick and Betsy bought a few lots of land on an undeveloped barrier island off the coast of southwest Florida along with an old boat called “Piece of Ship.” Mick went on to design and build three homes on the island. Hundreds of family and friends attribute their vacations on North Captiva, with Mick and Betsy’s unparalleled hospitality, as their fondest life memories. Days were filled with fishing; evenings were filled with cocktail music, wonderful food, and playing pool wearing fun novelty hats.

A talented artist, Mick left his signature doodles and cartoons everywhere. He was an avid reader, especially of history and military books, and skilled in crossword puzzles. He loved traveling the world, Taylor’s ice cream, and musical theater; he enjoyed when his grandkids would perform musical numbers from The Music Man or South Pacific for him. Above all, Mick was known for his signature laugh and zest for life. At a black tie wedding or somber funeral, Mick always sported white tennis shoes and a silly necktie with his tuxedo. He was a devoted mentor to Elwood youth, taught CCD classes and was heavily involved and contributed to Elwood youth sports. Neighborhood children would frequently ring the doorbell and ask, “Can Mick come out to play?” “Only if he’s home by dinnertime,” Betsy answered. It didn’t seem to occur to the kids that Mick was in his sixties.

Mick and Betsy spent months planning Christmas for their children and grandchildren, meticulously selecting gifts and experiences for dozens of individual tastes. “Melvin Christmas” was a marathon day filled with boisterous family celebration, generosity, champagne, raucous laughter, delicious food, faith, and love: the epitome of the life that Mick and Betsy created.

He connected with every person he met - regardless of age, background, race, wealth - with a rare sincerity and genuine interest. You always walked away from a conversation with Mick feeling better.

A mass of Christian burial will be held at St. Joseph’s Catholic Church at 10:00 am on June 19, 2021 with Father Dennis Goth and Father Paul Cochran officiating. Burial will follow at St. Joseph Catholic cemetery.

In lieu of flowers, donations can be made to Frederick's Friends Memorial at:  www.fredericksfriends.com; or Wounded Warrior Project at:  https://support.woundedwarriorproject.org

We’re certain Mick has already poured St. Peter a Manhattan, told a joke to St. Paul, and will be watching us with exuberance until we can join his party in heaven. Tonight, please raise a toast to Mick Melvin and all the joy he brought to this world.

To order memorial trees or send flowers to the family in memory of Michael "Mick" Melvin, please visit our flower store.