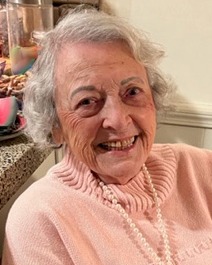 Joann was a homemaker but also held many positions in secretarial, bookeeping and receptionist capacities throughout her life. Carl, her husband of sixty eight years, preceded her in death in 2020. Joann and Carl spent the first seven years of their marriage in Seattle, Washington, where they enjoyed sailing and  skiing, and a fun social life. They then moved to Virginia and lived in several homes near Washington DC where Carl worked. Following retirement, they moved to Indiana to be closer to family. They eventually moved to Westfield, Indiana to be closer to their daughter, Martessa, where they enjoyed playing bridge in Noblesville Senior Center.

Joann is survived by her daughters, Pam (Dean) Cantu and Martessa Conover (Danny Young); seven granddaughters; two grandsons-in-law; three great-grandsons; and her brother, Terry Thornburg and his growing family who were all very dear to her.

To order memorial trees or send flowers to the family in memory of Joann Ruth Conover, please visit our flower store.