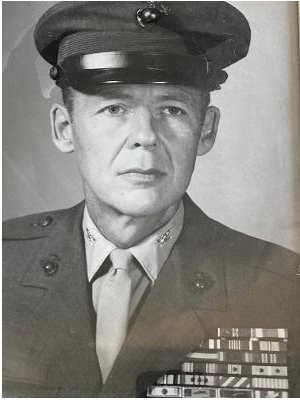 Colonel Hyndman of Noblesville died January 11, 2022. Jerry was born in Wellington, Kansas 18 February 1929 to Gene and Madge Hyndman (both deceased).

He graduated from Wellington High School in 1946. He enlisted in the US Navy, then attended and graduated from the US Naval Academy and was commissioned a second lieutenant in the USMC 6 June 1952. He married Joan Blakeslee, the love of his life, the following day. As an infantry officer he fought in the Korean War, Beruit Lebanon in 1958, and served two tours in Vietnam. He proudly served 27 years in the Marine Corps. After retiring, he was Program Manager for USMC contracts at Northrop Services for 11 years, and Business Manager for Blessed Sacrament Parish in Alexandria, Virginia for 6 years. He was Military Consultant for CBS Television News for the Falkland War, appearing in the morning and 11 PM news. He earned an MA from George Washington University in Personnel Administration, and an MPA from American University in Computer Science and MIS. He also completed Command and Staff College at Quantico, Virginia, and the Canadian Defense College in Kingston, Ontario. He served the poor through Food for Others for many years, was a Communion Minister and Lector primarily at St. James Catholic Church in Virginia and Our Lady of Grace Catholic Church in Noblesville. He was a member of the Knights of Columbus Council 9706, the Military Officers Association of America, and was the founding president of the Mens Club at St James Parish.  He enjoyed spending time with his family, the theater, reading, running, camping, hiking portions of the Appalachian Trail, and deer hunting with his son.

He was preceded in death by his brother John.

Jerry was a devoted husband, and an adoring father and grandfather.

Funeral services will be held at 11:00 am on Saturday January 15, 2022 with viewing beginning at 10:15 am at Our Lady of Grace Catholic Church, 9900 E. 191st Street in Noblesville with internment at the National Cemetery in Marion, IN.

To order memorial trees or send flowers to the family in memory of Gerald Hyndman, please visit our flower store.
Send a Sympathy Card