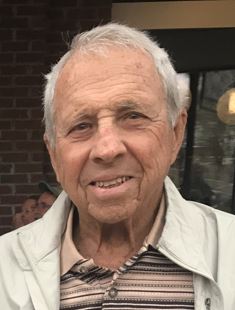 George graduated from Bourbon HS in 1950 where he was a member of the high school basketball team.  He attended business college before proudly serving his country in the United States Army.  In 1959, he received his bachelor's degree in Accounting from Indiana University, where he met his wife, Cathy.  He started his career at Price Waterhouse in Chicago and later co-owned Hahn Systems Inc. in Indianapolis for many years with his brother.  But George never really retired.  He stayed actively involved in several business ventures.  George was a member of Noblesville First United Methodist Church where he served on several committees.  He was a member of Kiwanis International and Lambda Chi Alpha fraternity.  He enjoyed golf, poker, boating, hunting, fishing, and Taco Tuesday with his buddies.  He was an avid IU and Cubs fan and loved spending his retirement years playing golf in The Villages down in Florida. He shared his love for card games and dominoes with his friends and family – always a competitor until the very end!

He is survived by his wife of 60 years, Catherine Hahn; twin daughters, Cathie (Bryan) Mills and Angie (Steve) Bell; daughter, Melissa (Eric) Marohn; and sister, Marjorie Osborne. He was blessed with 10 surviving grandchildren and 6 great-grandchildren.

In addition to his parents, George was preceded in death by his brother, Warren Hahn; sister, Shirley Neal; and granddaughter, Ella Marohn.

Visitation will be from 4:00 pm to 7:00 pm on Wednesday, October 13, 2021 at Randall & Roberts Funeral Center, 1685 Westfield Road, in Noblesville.  Services will be held at 2:00 pm on Thursday, October 14, 2021 at Noblesville First United Methodist Church, 2051 Monument Street in Noblesville, with Pastor Jerry Rairdon officiating.  Burial will be at Hamilton Memorial Park Cemetery in Westfield.

Memorial contributions may be made to Noblesville First United Methodist Church, 2051 Monument Street, Noblesville, IN 46060.

To order memorial trees or send flowers to the family in memory of George Edward Hahn, please visit our flower store.
Send a Sympathy Card