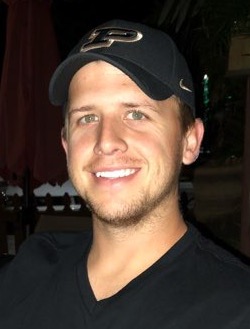 Evan was born in Houston, Texas on March 24, 1993 to Cindy (nee Shaffer) and Gordon Thoennes where he lived until his family relocated to Fishers, Indiana.  He graduated from Fishers High School in May 2011, and upon graduation attended Purdue University where he earned a Bachelor of Science in Building Construction Management in May 2015. Evan was a member of Sigma Phi Epsilon Fraternity.

Upon obtaining his degree, Evan began working at Power Design, Inc., based in St. Petersburg, Florida, as a Project Engineer and rose to the level of Project Manager which was his position at the time of his passing. Power Design, coincidentally, afforded Evan the opportunity to return to Houston, Texas to assist in project completion. Evan loved his work, his friends, and coworkers at Power Design.

Soccer was Evan’s long-time passion, from youth through college, and as an adult. He also enjoyed fishing, outdoor activities, and loved being near the water. He was a sports fan and especially enjoyed cheering his Purdue Boilermakers and Indianapolis Colts.

Evan was preceded in death by his grandparents, Charles Thoennes, Bob and Vera Densborn, Jerry Shaffer, and Patricia Shaffer.

A funeral mass will be held at 10:00 am on Friday, January 8, 2021 at St. Louis de Montfort Catholic Church, 11441 Hague Road in Fishers, with Father Thomas Haan officiating. Visitation will be from 4:00 pm to 8:00 pm on Thursday, January 7, 2021 at Randall & Roberts Fishers Mortuary, 12010 Allisonville Road, in Fishers. Innichement will be at Oaklawn Memorial Gardens in Indianapolis. A celebration of life will be held at a later date in St. Petersburg, Florida.

To order memorial trees or send flowers to the family in memory of Evan Charles Thoennes, please visit our flower store.
Send a Sympathy Card