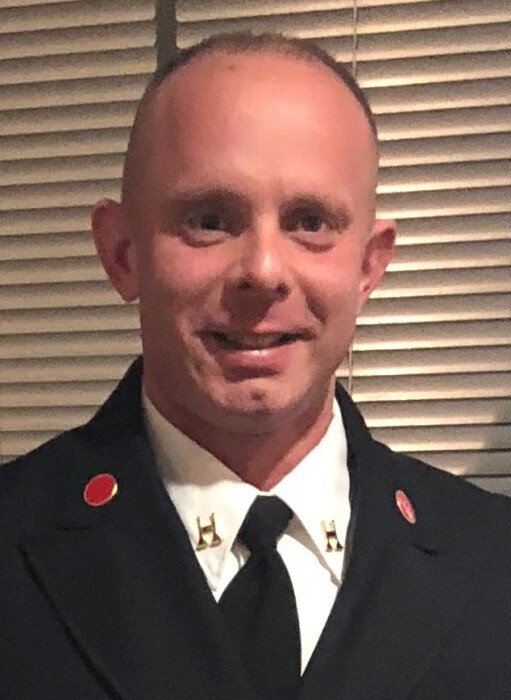 Craig Martin Hall , 45, of Indianapolis, passed away unexpectedly on Tuesday, April 5, 2022 at St. Vincent Hospital in Indianapolis.  He was born on December 7, 1976 in Salem, Indiana.

Craig proudly served his country in the Air Force Reserve as a fireman.  He worked for the Greenwood Fire Department as a firefighter, EMT, and Captain of Station 92 for over 24 years.  Craig had also served as a firefighter for the Indianapolis Airport for 5 years.  He loved fishing, boating, traveling, and working out.  Craig enjoyed cooking, grilling, and playing guitar with his son.

Craig was preceded in death by his father, Glenn Batt.

Visitation will be from 3:00 pm to 8:00 pm on Monday, April 11, 2022 at Randall & Roberts Fishers Mortuary, 12010 Allisonville Road, in Fishers.  Services will be held at 11:00 am, with visitation beginning at 10:00 am, on Tuesday, April 12, 2022 at the funeral home, with Pastor Gary Black officiating.   Burial with fire department honors and military rites will follow at  Oaklawn Memorial Gardens in Indianapolis.

Memorial contributions may be made to Peyton Manning Children's Hospital at St. Vincent, 2001 W. 86th Street, Indianapolis, IN 46260 (www.peytonmanningch.org).

To order memorial trees or send flowers to the family in memory of Craig Hall, please visit our flower store.
Send a Sympathy Card