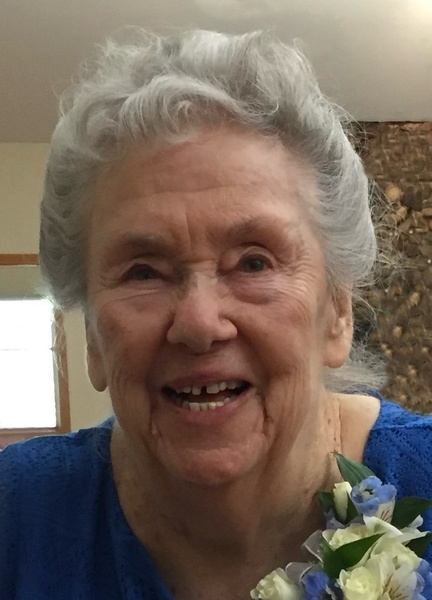 Barbara Jean Nethery, 93, of Noblesville, passed away on Sunday, July 3, 2022.  The fabric of her 93 years was tightly woven with her Faith, family, friends and of course, food!

Barbara’s story began on September 9, 1928.  She was born to Milton and Lela (Treadway) Linthicum in rural Monroe County, Indiana.  Barbara attended Kirksville school and cherished her school friendships throughout her life.  She would proudly sing the Kirksville fight song upon request.  Barbara became the family cook when her mother passed away and this became a defining role throughout her life.

In 1946, Barbara met and married Ralph Nethery, a sailor returning home from World War II.   It was a love story that would span over 74 years and likely over 50,000 shared pots of coffee.  They moved to Noblesville for the promise of jobs at Firestone, but found so much more.  They added 5 children to their family and developed a Faith that became the bedrock of their lives.  Barbara and Ralph were founding members of the First Pentecostal Church of Noblesville and developed life-long friendships through the church.   Barbara enjoyed traveling to the annual conference, winters in Brownsville, Texas and making her famous peanut brittle for church bake sales.  Barbara and Ralph were often found at Jim Dandy with church friends or family, as Barbara tried to cajole Sam out of the top-secret coleslaw recipe.

Barbara also worked at BestLock for over 10 years and credits BestLock as where she got her signature cauliflower salad recipe from a co-worker.  In retirement, Barbara and Ralph bought a farm in Scottsville, Kentucky where they enjoyed many years.  They quickly made close friends at their church in Bowling Green, enjoyed summer visits with their 12 grandkids and hosted the Nethery Family “goat roping” every Labor Day weekend.

They returned to Hamilton County in 2000 and their home quickly became headquarters for Saturday morning drop-in family breakfasts featuring Barbara’s biscuits and gravy and endless pots of coffee.  She enjoyed these Saturday mornings in her recliner, catching up on family news, discussing recipes as well as the latest diet she would be starting on Monday.  Barbara was a treasured wife, mother, grandmother, great grandmother and close friend to many.  She will be dearly missed, but God has called her home.

In addition to her parents, Barbara was preceded in death by her husband of 74 years, Ralph W. Nethery; sister, Faye Warren; cousin, Wayne Martin; and step-mother, Sylvia Linthicum.

Services will be held at Randall & Roberts Funeral Home, 1150 Logan Street, in Noblesville on Friday, July 8 at 2:00 PM with Pastor Bill Chapman officiating.  Visitation will be from Noon until the time of service.  Burial will follow the service at Crownland Cemetery in Noblesville.

Memorial contributions may be made to Tupelo Children’s Mansion (mansionkids.org); or to the 2022 Walk to End Alzheimer’s Heartland:  Team C & N (act.alz.org).

To order memorial trees or send flowers to the family in memory of Barbara Jean Nethery, please visit our flower store.
Send a Sympathy Card